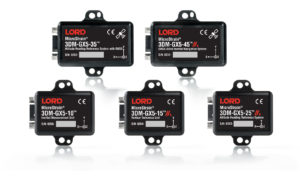 The 3DM-GX5 is the latest generation of the LORD MicroStrain 3DM-GX series of IMU, VG, AHRS, and GPS-INS sensors. This is truly a “drop-in” replacement for the previous-generation GX4 inertial sensors, making it extremely simple to upgrade. The GX5 shares the same extended temperature range operation, footprint, rugged aluminium case, reliability, low power, broad voltage supply, power/communication cabling, weight, and MIP API as the 3DM-GX4, making it a true drop-in replacement. However, there are many new improved features of the GX5 series and some MIP API commands have been expanded, whilst others have been added. The most significant sensor improvement in the GX5 is the accelerometers. The accelerometers now have a bias instability of <±0.04 mg and a noise density which is an industry leading 25 μg/√Hz for the 2g version. This noise density is only slightly higher for the 8g version (35 μg/√Hz). These improvements, combined with the associated improvements in the Kalman Filter result in extremely accurate position, velocity, and attitude accuracy even with aiding anomalies and outages. The gyros used in the GX5 are the same high performance gyros used in the GX4 series, however better performance in the GX5 is achieved by moving to an ultra-high performance 24-bit ADC and adding other improvements to the data conditioning circuit. The room temperature bias instability has improved from 10°/hour to 7°/hour and overall bias drift is half of what it was in the GX4.The GX5-45 and GX5-35 include a state-of-the-art multi-constellation GNSS receiver that can simultaneously track up to 32 satellites from various constellations, whereas the GX4 tracked 16 satellites in the GPS constellation only. This increased access to positioning information makes the performance in areas of restricted sky view such as urban canyons much more reliable and accurate. There are other changes to consider, and for more information on these.