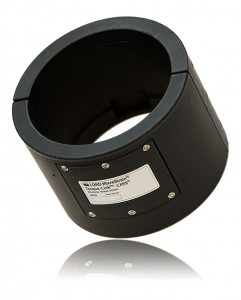 LORD MicroStrain has introduced a wireless system specifically designed for use with strain gauges that are mounted on a shaft in order to measure torque. The Torque-Link™-LXRS® is a specialised analogue sensor node designed to fit over rotating shafts for wireless strain and torque measurements.

The node has one or two differential analogue input channels which are designed for full-bridge strain gauge integration. It is ideal for static and dynamic torque measurements with full temperature compensation and bending cancellation, the rugged ABS housing is designed for remote, long-term installation on cylindrical shafts. Wireless data transmission allows installation on rotating components without a slip ring. Standard or custom diameters are available. The housing installs over existing strain elements with no mechanical shaft modifications. The system features lossless data throughput and node-to-node sampling synchronization of ±32 μS in LXRS-enabled modes, so that more than one node can be used in the same system. At the heart of a network of these nodes are the WSDA® base stations, which use exclusive beaconing protocols to synchronize precision timekeepers embedded within each sensor node in the network. The WSDA® also coordinates data collection from all sensor nodes. Users can easily programme each node on the network for simultaneous, periodic, or burst mode sampling with the Node Commander® software, which automatically configures network radio communications to maximize the sample rate. Applications include condition-based monitoring and health monitoring of rotating components on aircraft, structures, or vehicles.